Our mission is to steward and maintain Eastern State Penitentiary Park for all, cultivating positive relationships and strong ties between residents of Fairmount, Francisville, and Spring Garden neighborhoods.

History of FESPP and the gardens

​In 1996, FESPP received a Philadelphia Urban Resources Partnership grant and was incorporated as a nonprofit 501(c)(3) organization. The Brown Street Lawn and Corinthian Gardens were developed from 1996-2000, and the Playpen was constructed from 2004-2005. The Corinthian Gardens area, which includes public gardens, recreation and education spaces, and individual garden plots, officially opened to the public in 2020. FESPP maintains these areas and hosts educational and community-focused events throughout the year.
​
Eastern State Penitentiary Park never would have happened without the commitment of area businesses and hard work of neighborhood volunteers. Since the park’s inception, volunteers have been vital to developing and maintaining the inviting community spaces of Eastern State Penitentiary Park. Individual donations and grants to FESPP make it possible for the volunteers to maintain the park and make improvements. ​

Before and after transformations 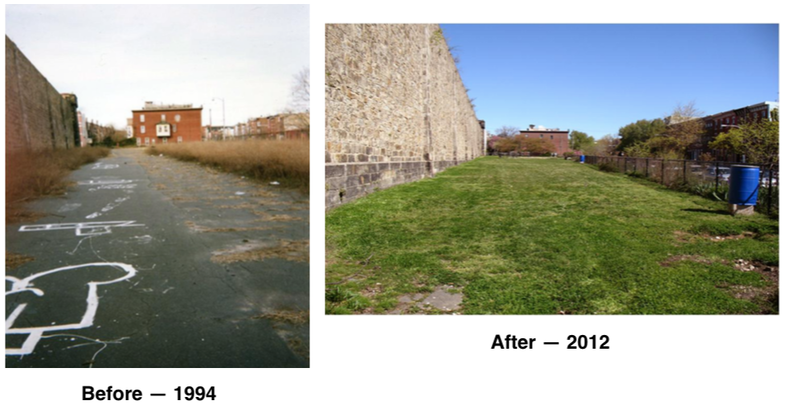